Bitcoin’s hashrate has observed significant growth in 2022 so far, setting a new ATH. Here’s how much each of the largest mining companies have been adding to this increase.

As per the latest weekly report from Arcane Research, Riot seems to have added mining capacity the fastest in the year so far.

The “hashrate” is a measure of the Bitcoin mining power of a rig. It tells us how many hashes per second can the machine handle.

The “total hashrate” on the BTC network tells us how much of this mining power is connected to the blockchain in all.

Throughout 2022 so far, this indicator has observed an increase, setting a new ATH just recently. This means that miners have been constantly upgrading their capacity during the period.

An increasing hashrate means miners’ revenues shrink as the competition on the network increases. So, to remain competitive and secure their profits, miners have to up their individual hashrate.

Now, here is a chart that shows how the largest Bitcoin mining companies have grown their mining rig capacity in this year: 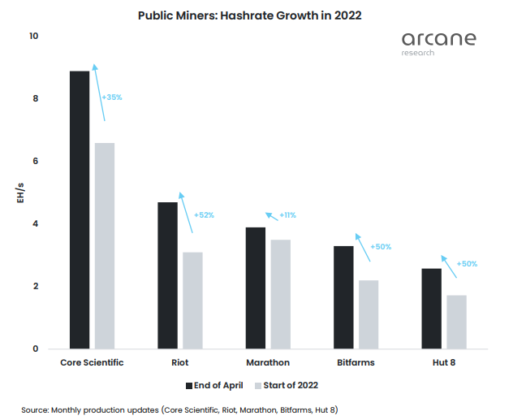 As you can see in the above graph, Riot is the mining company that increased its Bitcoin hashrate the most since the start of 2022.

Core saw the second fastest increase at 35%, behind Riot’s 52%. Despite the lesser growth, the firm still has the biggest mining capacity by a large margin.

Interestingly, Marathon’s hashrate at the start of the year was more than Riot’s, but it could only grow its capacity by 11%.

Due to this small increase, Riot has overtaken the mining company to become the second largest miner in the Bitcoin market.

Both Bitfarms and Hut 8, the fourth and fifth placed mining companies, respectively, saw a growth of around 50% each.

In terms of the pure amount of hashrate that a miner added to the Bitcoin network this year, Core has still been ahead of Riot.

Earlier today Bitcoin’s price fell down to as low as $26k, but since then the cryptocurrency has rebounded back a little.

The below chart shows the trend in the price of Bitcoin over the last five days. 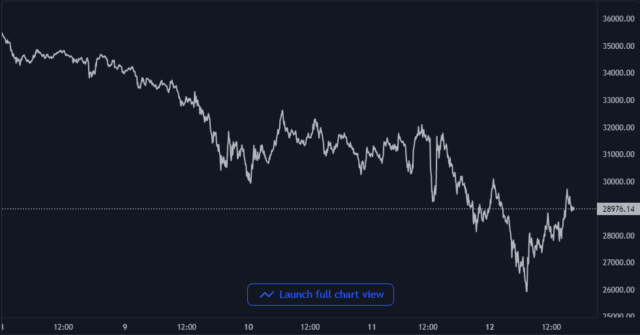 The Meme Coins That Dominate The Top Ethereum Whale Holdings

XRP Primed For Rallye As Ripple Is Bullish On MENA Growth