The Terra UST crash is no longer news to those in the space. However, the cause of the crash remains a largely speculated issue. Out of the speculations that have been making the rounds, the most popular has been the scandalous accusation that named the likes of BlackRock, Citadel, and crypto exchange Gemini.

In the heat of the crypto market crash, the UST issues have been the most prominent. This has led people to look for answers anywhere and as such, there have been a number of rumors making the rounds. Most prominent of these have been a screenshot that was posted by Cardano founder, Charles Hoskinson, on his Twitter account.

In the now-deleted tweet, Hoskison had posted a screenshot that looked to be a forwarded message from someone named Anna. This screenshot alleged that the UST chance was not by chance but an organized, strategic account on the cryptocurrency by major players in the investments space including the world’s largest asset manager, BlackRock, investment firm Citadel, and cryptocurrency exchange, Gemini. 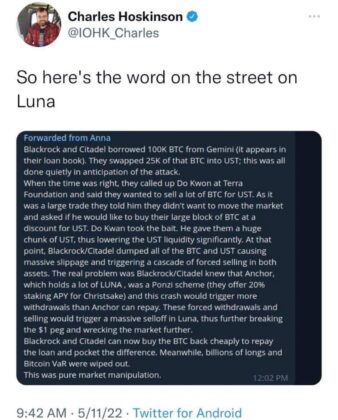 The screenshot accused these three institutions of coordinating the attack on Terra, using both UST and BTC, ending that it was pure market manipulation on their end.

In true Twitter fashion, community members had quickly circulated this screenshot around the interwebs, causing a flurry of accusations against these institutions. This has pushed them to address these rumors.

Crypto exchange Gemini which was one of those accused in this screenshot has come out to deny the accusations that it was involved in the UST crash. It is alleged that the exchange had provided a 100,000 BTC loan to these institutions, which they had subsequently ‘used’ to crater the cryptocurrency, causing $25 billion to be wiped off LUNA’s market cap.

In the post, Gemini denies any wrongdoing and expressly stated that it had in fact not provided any such loan to any of the parties named in the screenshot.

“We are aware of a recent story that suggested Gemini made a 100K BTC loan to large institutional counter-parties that reportedly resulted in a selloff in $LUNA. Gemini made no such loan,” the statement read.

Gemini is not the only institution that has come out to debunk these rumors though. Both BlackRock and Citadel have denied the accusations as well. Citadel Securities has publicly stated that it had no hand in the crash as it does not even trade stablecoins.

“Rumors that BlackRock had a role in the collapse of UST are categorically false. In fact, BlackRock does not trade UST,” said Logan Koffler, a spokesperson for BlackRock.

At the time of this writing, LUNA has lost over 90% of its value to be trading at $0.08. While UST has completely depegged from the U.S. dollar and is currently trading at $0.7. Their market caps now sit at $245 million and $16.54 billion respectively.

Why The VIX Might Predict A Bitcoin And Crypto Rally

Bitcoin mining difficulty hits an ATH of above 30 trillion