Spotify is making a foray into the metaverse, becoming the first music streaming platform to enter the virtual realm.

The metaverse, and the broader realm of web3 in general, are advancing at a breakneck pace.

According to whom you ask, this futuristic, blockchain-based area is either the next great thing in marketing – and nearly everything else – or an overblown cliché.

This week’s highlights include the Swedish audio streamer and media services provider, which now has a musical island in the metaverse dedicated to its fans.

The new virtual world provides users with a one-of-a-kind music-themed island where they may dance, experiment with audio, and share their stories with everyone else. 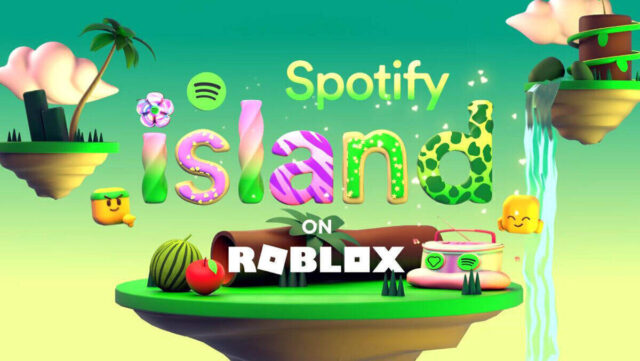 Lots Of Green And Sound On Spotify Island

The move was enabled by Roblox, an open-world massively multiplayer online game that has been extremely successful in creating virtual settings that allow players to create and share experiences in this new market.

Spotify’s Roblox island features a style that is consistent with its brand: a massive serving of green and forms, colors, and icons familiar from its apps.

All of these are also part of the game. For instance, you can collect the heart-shaped “Like” icons to earn free stuff.

In terms of digital products, Spotify believes the exclusive in-game virtual merchandise will provide an opportunity for artists to engage with their fans and earn money.

“Through this dynamic universe, we’re creating a venue for fans to connect and collaborate on new sounds, socialize in digital locations, and have access to special virtual merchandise.” Spotify Island is a one-of-a-kind audio sanctuary,” a Spotify representative said.

Roblox was included in March’s list of the 500 most groundbreaking firms of the year, owing to its web 3.0 activities.

Roblox is tremendously popular among youngsters and teenagers, and the new “island” is the first time a music-streaming firm has established a presence in the game.

Big Names In The Metaverse

Before Spotify, global brands such as Nike, Visa, and Ralph Lauren have already partnered with the game to launch metaverse campaigns.

Roblox has a daily active user base of more than 40 million. The term “metaverse” gained popularity after Facebook CEO Mark Zuckerberg rebranded the company as Meta, promising that the new entity would focus exclusively on the metaverse in the coming years.

Additionally, Spotify stated that it is developing “a simple option” for artists to connect with fans and collaborate with the company on the creation of in-game virtual products.

A portion of the proceeds from merchandise purchases will be distributed directly to the artists.

Chainlink Price: Why it Has Strong Long-term Growth Prospects

Why VeChain Is Attractive At $0.02, Is VET Aiming For A Big Move?

DASH/USD Reaching For the $45 Resistance Degree

NEAR Price Could Drop To $3 If This Bearish Pattern Continues