Previous studies about Bitcoin acceptance claim a significant gender gap problem, but a new research by Spiral sheds light on a shifting reality that might turn into a more hopeful future for equal financial literacy.

The global study collected data from “24 women who work in the bitcoin and crypto field”; 17 women who had never used BTC but are aware of it, all from nine countries outside of the U.S. that show high rates of adoption; and surveyed “1,030 men and women with similar demographics from the same countries and a 50/50 gender split.”

This methodology was meant to learn “how women feel about bitcoin and how their perceptions differ from men’s.” The study came out with several interesting findings, one of which being that “attitudes toward bitcoin are largely the same across genders.”

“Our survey showed that men and women have similar, positive perceptions about bitcoin’s safety, and equally believe that bitcoin was created for someone like them.” 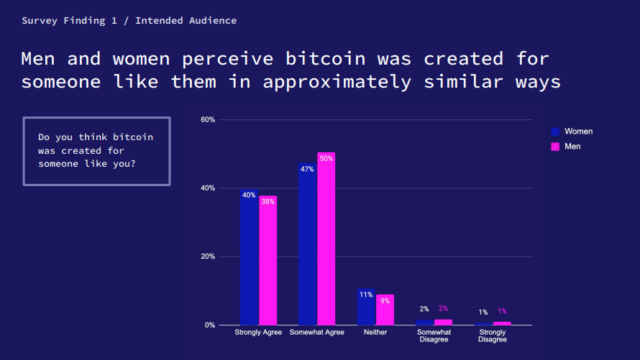 The report cites former studies by SoFi and Fidelity that show how supposedly “women are more risk-averse than men regarding traditional investing methods.” But the Spiral data found that the surveyed women are more willing to take financial risks than men. 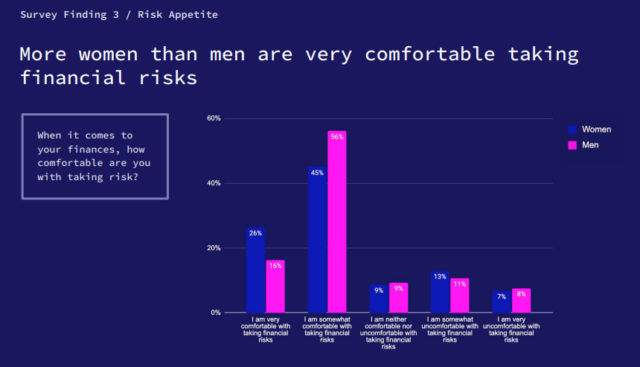 These women also seem to prefer doing plenty of research before deciding to invest in Bitcoin because many of them do not fully understand it nor do they fully trust it. The positive news is that the current lack of trust does not stop them from considering it as an investment, but rather leads them to gather more information first.

“More women than men reported wanting to do “a lot” of research before considering buying bitcoin. However, we also heard that women are optimistic about bitcoin’s future and are not opposed to purchasing bitcoin once they are confident that they understand it.”

The biggest issue yet seems to be that getting educated about it is not as easy as it might seem. When one is outside of the crypto circle, information about the blockchain does not come around so easily and only a general knowledge seems to be reaching the masses.

“Due to the lack of a centralized resource, beginners entering the space had to do a lot of guesswork to connect the different sources. Women who didn’t have a technical background struggled with finding information that could ‘cut through the noise.’”

One of the interviewed women commented: “The issue is you have to be so interested that you go out of your way. If it doesn’t move in your circles, the information doesn’t come naturally.” However, this same Nigerian woman has high hopes for the future of Bitcoin as a solution for the current financial system:

“I dream about bitcoin everyday. I’m sorry to say but there have been a few bad people who are taking advantage of the way that the financial institution is set up.”

If the gap is now educational, this is an issue that might get solved over time. Many female celebrities are joining the crypto world and once inside, there are strong influential women that might catch the eye of newcomers and inspire them.

“Women felt motivated not only by creating wealth for themselves” concludes the study, “but also by building better financial accessibility for others.” As the world is set to start learning about the socio-economic benefits of the BTC blockchain, a general awakening might start happening.

While some of the women interviewed still lack trust and understanding of it, they still talked about issues of the political and financial systems they are living under that could not highlight better the need for BTC.

A woman from Argentina said: “Every month I convert as much of my paycheck as possible to dollars, and every 2 months I withdraw the money and store it as physical cash in fear the government will take my money if left in the bank.”

“Women are open to the idea of buying bitcoin once they can afford and understand it, and are hopeful bitcoin can address problems imposed by the current financial system,” the study finds.

As the gender gap semingly closes, the motivations to understand and invest in BTC also grow in a richer variety of colors.